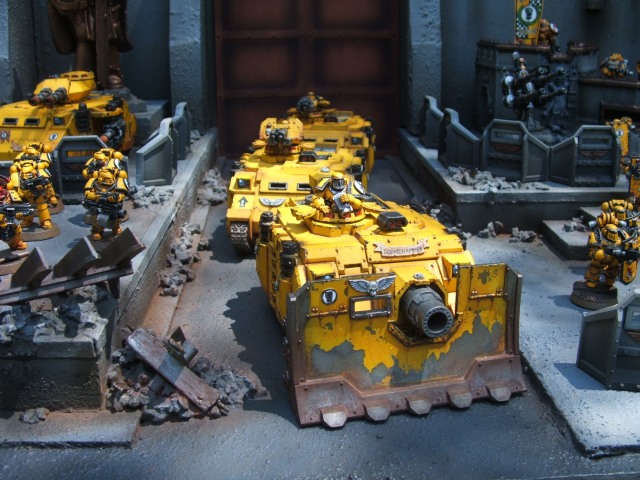 Here are some photos of my Imperial Fists army I’ve been working on of late. I’ve had a lot of fun with the Imperial Fists, both from a hobby perspective and using them on the tabletop. The army was originally intended to play primarily in games of 40k, however I’ve found games of Horus Heresy to be far more enjoyable. As a result, the focus on the army has shifted entirely to be an army designed for use in 30k. The army is almost finished now and can field around 11,000 points of fully Horus Heresy compliant units. I’m sure I’ll end up adding a few more bits and pieces though, as no army is ever really finished.

Captain Lysander, based on the Forge World Preator model

The storm shield is from the Deathwing Knight set

Details of some of the breaching shields

Details of some of the breaching squad

More members of the breaching squad

Imperial Fists Breaching Squad, although I use them as a Tactical Squad

Imperial Fists Breaching Squad formed up into a phallanx

The Third Tactical Squad of the Imperial Fists 5th Company

The Sixth Tactical Squad of the Imperial Fists 5th Company

Imperial Fists Rhinos. These up-armoured Rhinos are used for the breaching squds

The Storm Talon was based on the Dark Angels Dark Talon

Forge World etched brass was used for many of the symbols

The buisness end of the line breaker squadron

Imperial Fists Predator Squadron. The predator on the left was one of the first test models for the army

Another angle of the Typhon

The Spartan and the Typhon, two of the heavy weights of the Imperial Fists

A Sternguard legionary rushes forward beside his brothers

Imperial Fists Vindicator lines up to level an enemy position

by Gamers for Gamers

Painting, converting, and gaming in the 31st millennium

Fires Of The Forge

But time you enjoy wasting, is not wasted time...

Denizens of the Dark City

"Fetch me another play thing, this one seems to have broken," Urien Rakarth